Skip to content
Home‘American Universities Are Addicted to Chinese Students’

A startling number of Chinese students are getting kicked out of American colleges. According to a white paper published by WholeRen, a Pittsburgh-based consultancy, an estimated 8,000 students from China were expelled from universities and colleges across the United States in 2013-4. The vast majority of these students—around 80 percent—were removed due to cheating or failing their classes.

As long as universities have existed, students have found a way to get expelled from them. But the prevalence of expulsions of Chinese students should be a source of alarm for American university administrators. According to the Institute of International Education, 274,439 students from China attended school in the United States in 2013-4, a 16 percent jump from the year before. Chinese students represent 31 percent of all international students in the country and contributed an estimated $22 billion to the U.S. economy in 2014. 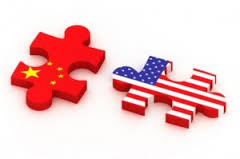 story du jour from The Atlantic about the leading country of origin, China, whose students comprise nearly one-third of the 886,052 international students in the US.  It’s no wonder they attract a disproportionate amount of attention from the media, both positive and negative. In this case, it’s the latter – China as international education whipping boy.

While words like “startling” and “massive” are bandied about, the actual percentage of Chinese students who were expelled in 2013-14 because of cheating or failing their classes was about 2.9%, which means the other 97.1% were at least meeting minimum standards and most doing considerably better than that.  (Cheating is a national pastime in much of Asia so it shouldn’t come as a complete surprise that Asian students cheat in the US, along with the US peers, albeit to a lesser extent.  What makes China unique and what increases the likelihood that more of its students will be expelled is that 1 in 3 international students in the US is Chinese!)

One thoughtful international education colleague provided some much-needed context with this reaction to the article:

Frankly, I was surprised that the number wasn’t even higher. The entire education regime in China is fundamentally different from the US system, so to expect similar results/outcomes when Chinese students study in the US system is ludicrous to begin with. Add to that, the radical differences in the extra-academic environment, and 8,000 seems low to me. It is to the credit of the Chinese that the number is not higher. This is what the article should have focused on.

A more refined focus would have highlighted how the Chinese, on a per-student basis, actually shift the GPA curve higher, and this is true at every institution that admits Chinese students. They have a higher on-time college completion rate than US students, they pay full tuition (except for the merit scholarship students), and they do not participate in the carnal excesses of Greek loser life. They are often tutors and class/lab assistants in the STEM fields. And in the classroom they contribute a diversity of perspectives and opinions that simply do not exist among US students.

The 8,000 seems significant, but there was no breakdown of how many of those students were expelled for willful delinquency versus expelled for poor academic performance resulting from depression, difficulty in adjusting/assimilating, making mistakes due to lack of knowledge of the campus culture, poor institutional fit due to unscrupulous agents/admissions offices, inexperienced and ignorant student service administrators/staff/faculty, etc.

I would like to see the expulsion numbers for the Saudi students, who contribute far less academically and who seem to knowingly and intentionally get into more trouble for non-academic reasons (and even academic dishonesty reasons) far out of proportion to their numbers. 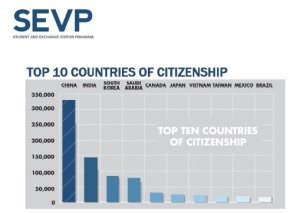 Another big story is the sheer number of Chinese students enrolled in many of America’s colleges and universities, which has created a several problems.  One is that some of those institutions that have opted to pick the low-hanging fruit have become victims of their own success.  They have Chinese ghettos that make it difficult for many Chinese students to adjust and continue to improve their English proficiency.  (Many Vietnamese and Chinese parents share this concern, and would prefer to send their children to schools that do not have too many students from their countries.)

There are other schools that have chosen to limit their Chinese enrollment in the interest of diversity and recruit from other key markets, including Vietnam.  This explains in part the growing interest in Vietnamese students and those from other countries.  It’s not all about “showin’ me the money,” i.e., tuition dollars and related financial contributions.

So, while the title is juicy and guaranteed to garner thousands of Facebook likes and Tweets, the reality is more complex and nuanced.  Wise institutions follow the path of diversification to the benefit of their students, communities and reputation.

One thought on “‘American Universities Are Addicted to Chinese Students’”