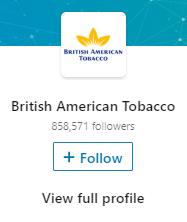 While checking out my LinkedIn account recently, I stumbled upon a video produced by British American Tobacco (BAT).  It was about a trip to London for 140 employees from more than 40 countries, including Viet Nam.  Keep in mind that this is a country in which nearly 50% of all men smoke and growing numbers of young women, the “next frontier,” are taking up this decidedly unhealthy habit.  The most-cited figure is 5% but my guess is it’s inching up, based on anecdotal evidence.  Below are screenshots of the announcement and my comment.

In case you’re wondering, or need to be reminded, BAT is a British multinational cigarette and tobacco manufacturing company headquartered in London.  As of 2012, it was the second-largest cigarette maker in the world with a “market-leading position” in over 50 countries and operations in around 180 countries.  Its 2018 revenue was $24.49 billion.  Not that you’re counting but it’s market capitalization was $90.22 billion, as of 6 December 2019. 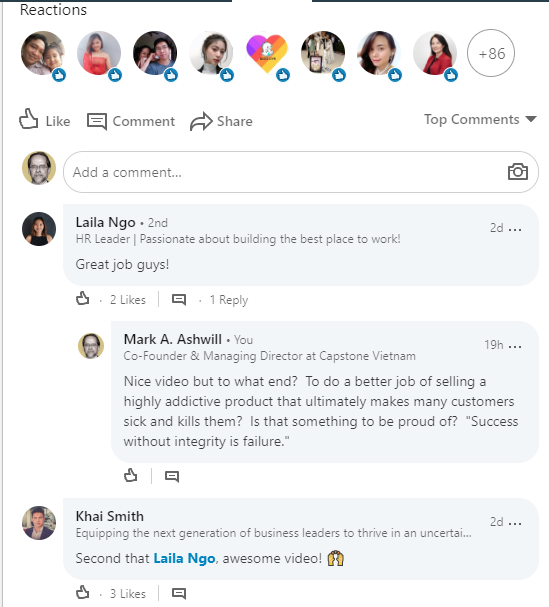 Gotta love the hashtags:  #BATcareers #BATVietnam #NextGenBAT #ShapeTheAnswers #BringYourDifference  Who can get inspired about being involved in an operation that produces and sells a highly addictive product that is damaging to the health of its customers and ultimately kills many of them?  Someone with a highly compartmentalized moral code, that’s who.  The smiling young faces are in stark contrast to patients languishing in hospital beds dying of various smoking-related diseases.

“Great job guys”  Let’s sell more cigarettes and other tobacco-related products because success is defined by higher revenue, and personal income and perks, isn’t it?  “Awesome video!”  Yeah, but to what end?  Have any of these people heard of Right Livelihood, which means ethical livelihood and is part of the eight-fold path taught by the Buddha?  (Crickets.  Yeah, that’s what I thought.)

Postscript:  Check out the (unedited) responses that followed my comment:

exactly, would people work for a lead or asbestos company? Same answer here….

You ms ngo should take a look at yourself. Nothing “great” about this soul destroying product.

Unfortunately all your efforts result in killing people who use your product. Harsh, but true.

Seriously who wants to work for a Tobacco Company? (edit)

You know what this is terrible! Promoting products that inevitably kill or cause serious illnesses to people is wrong. I would love to see the dislikes on this post if LinkedIn had a dislike thumb. There are so many other ways to make a living other than off the back of peoples suffering. Everyone who liked this post should have a long hard look at themselves.

Bonus:  If you haven’t seen it already, I highly recommend The Insider, a 1999 US movie about Jeffrey Wigand, a whistleblower in the tobacco industry.  Dr. Wigand is a biochemist and former vice president of research and development at Brown & Williamson in Louisville, Kentucky.  Guess who owns B&W?  Bingo!