Sometimes, the truth hurts but it’s also useful in solving problems, both individual and societal.  You know the expression, “The first step in solving a problem is recognizing there is one.”  Here are two key paragraphs from this 7 October Reuters piece about Hanoi’s recent and cyclical air pollution problem and some misguided attempts to deny the accuracy of the data collected by independent monitors and reported by AirVisual via its website and app.

The attack came after Vietnamese Facebook user (INSERT NAME), an online chemistry teacher with almost 350,000 followers on the website, said in a lengthy post that AirVisual was manipulating its data in order to sell air purifiers made by its parent company, IQair.

(INSERT NAME) did not offer any evidence to back up his claims, but the post – which said the AirVisual ranking would harm tourism to Vietnam and urged people to leave negative reviews of the app – quickly received thousands of shares and likes.

Of course, the online chemistry teacher (OCT) didn’t offer any evidence to back up his claims because he doesn’t have any.  That’s called shooting from the hip.  Or, to put it more crudely, I call bullshit.  Methinks the OCT should have put up or shut up.  It appears he’s just another social media “influencer” without data to back up his bold and slanderous assertion.  What was his ulterior motive?  More student customers?  Fame and fortune?

Yes, air pollution is ultimately good for IQAir’s bottom line but why would a reputable Swiss company endanger its sterling reputation by “manipulating its data’?  It just doesn’t compute.  Besides, Hanoi and HCMC do have an air pollution problem, along with a long list of other cities.  In the case of the former, where I live, some of it is cyclical, i.e., there’s more pollution at certain times of the year than others because of changing weather patterns, e.g., temperature inversion.  The causes include millions of motorbikes, trucks, and buses, and the ubiquitous and never-ending construction.

Just in case you believe the OCT’s unfounded charges, have a look at the result of the US Embassy-Hanoi monitoring station, which has been around for a long time.  (I think we can all agree that for all of its faults, the US government has no reason to manipulate air quality data.)  As of 10 a.m. on Tuesday, 8 October 2019, the air quality index registered 114, which is considered “unhealthy for sensitive groups.”

Here’s a relevant excerpt from the AirVisual website about the sources of data, which are many and varied.

Where does IQAir AirVisual get its data from?

IQAir AirVisual reports from governmental and non-governmental air monitoring stations. For each station, it always lists the data source, contributor and location. IQAir AirVisual does this to be fully transparent and to give its users a choice as to which data they want to follow.

Oh, and the OCT’s claim that the AirVisual ranking would harm tourism in Viet Nam?  That’s one possible side effect of air and water pollution not only in Hanoi but other tourist destinations, e.g., Danang.  (The point is it’s the POLLUTION that could negatively affect tourism not AirVisual rankings.  Duh.)  Then there’s the long-term damage that will be done to the health of millions of people, not to mention the environment in which they live, unless these problems are addressed sooner rather than later.  Finally, there’s economic development, which will be negatively impacted by pollution.

In the meantime, I’ll keep checking my AirVisual app, which I downloaded long before it became all the rage in Viet Nam simply because I like to know the air quality of the places in which I live and work, as well as those I visit for business and/or pleasure.

Here are two relevant posts I saw on Facebook last week.  (OK, I cleaned up some of the language in the second post.  This is a family blog, after all.) 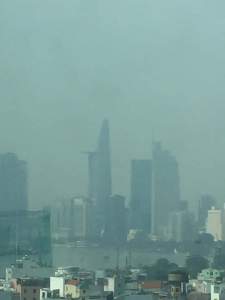 AirVisual is a Swiss company, please tell me the reason why they picked Vietnam of all places and started a massive conspiracy to undermine the trust in Vietnam’s crispy clean air? Moreover, this is what Saigon looks like from my bedroom window… it didn’t look like that yesterday when airvisual claimed 56 points compared to today’s 152. Airvisual might be a scam but are my eyes suddenly blurry or something?

If some of you put the amount of effort you put into defending yourself into changing the small things, you’d have good air. It’s as simple as that  It’s OK to admit you f_____ up.  It happens. It’s called life. Grow the (______) up.

Breaking news & screaming headline!  Vietnam teacher apologizes after igniting smear campaign against AirVisual.  This happened the day after the Reuters article was published and picked up by a number of international news outlets, including the New York Times.  Gee, I wonder why?  Maybe, probably, most likely, because of enormous pressure applied to the OCT by AirVisual attorneys.  Can he spell L-A-W-S-U-I-T, I wonder?  Most likely, he didn’t want to end up living in a rented room and using public transportation or worse because I’m pretty sure he would have ended up with nothing after justice ran its course.  For all I know, maybe the Swiss ambassador to Viet Nam filed a complaint with the Viet Nam Ministry of Foreign Affairs.

Yes, ladies and gentlemen, there are limits to freedom of speech.  We can’t just write and say whatever the hell we want whenever we want to, especially if it’s not true and especially if it’s harmful to others, in case this a Swiss company.  The offender was forced to shut up, thanks to swift action by AirVisual, because he couldn’t put it.  Chalk this up as a minor victory for accountability!

Can you guess what the greatest concern is for the Vietnamese?  Health (!), according to a recent Nielsen survey.