Aside from the title of this 5 July Bloomberg Businessweek article, an unfortunate play on what has been described as a “short-lived campaign by the United States military during the Vietnam War intended to win the popular support of the Vietnamese people,” I always have mixed feelings when I read about this type of project.  While it’s great that a new kindergarten was built with 80% of the funding coming from money raised by Procter & Gamble (P&G) employees, one of my fears is that political propaganda will be replaced by corporate propaganda.  The school has classrooms with slogans such as “Gillette Be Your Best,” “Pampers Golden Sleep,” and “Pantene Shine.”  What’s next?  Texbooks with P&G advertisements, daily announcements about P&G products, P&G-sponsored exams?

As one of the analysts quoted in the article put it, “They have to do this propaganda-esque process to eventually have a consumer who wants to buy their products.  It’s a time-tested tool that companies use.”  Iwasn’t born yesterday so I understand that there are always strings attached when corporations make donations to the public or non-profit sector but I’m concerned about the influence of the private sector on the public sector and the rise of school-industry propaganda.  In a poor country like Vietnam it’s easy to buy influence.  While consumers are much more sophisticated now than they were five (5) or 10 years ago, it’s still a bit like taking candy from a baby.  I’d prefer that companies like P&G stay out of schools and promote their products the old-fashioned way.  My hope, unrealistic as it is in a situation that involves money and other goodies, is that the government will find a way to prevent companies, domestic or multinational, from taking the path of least resistance in promoting their products and services. 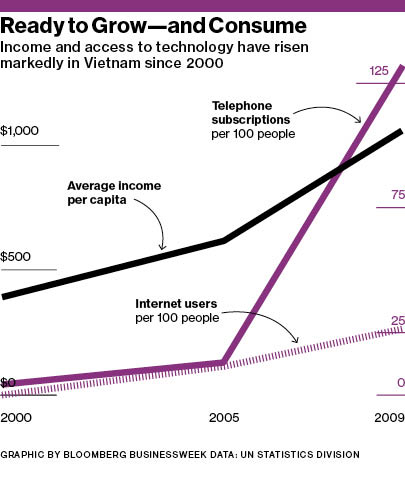 This is my favorite part of the article:

That evening, in a driving rain, a few hundred villagers gather under a tent in the courtyard of the kindergarten to watch students and teachers perform dances and songs. P&G’s Henretta (Deb Henretta, group president of P&G’s Asia business) is among those invited onto a makeshift stage to talk about the company. As she holds up products from its Tide, Downy, Rejoice, Gillette, Safeguard, and Oral-B brands, Henretta asks the audience to clap if they recognize them. Meanwhile, some of the P&G volunteers mime washing their clothes or hair to make sure everyone understands their use.

I love the imagery and the symbolism. P&G and Uncle Ho working hand-in-hand!

P.S.:  If you know Asia, you know that “white is beautiful,” which is why P&G is “betting on the appetite in Vietnam for premium brands—such as its Olay skin whiteners…”  The irony is that a lot of white women spend hours in the sun and in tanning salons in order to have the skin color that a lot of Vietnamese women have naturally.

2 thoughts on ““In Vietnam, P&G Woos Hearts, Minds, and Schools””