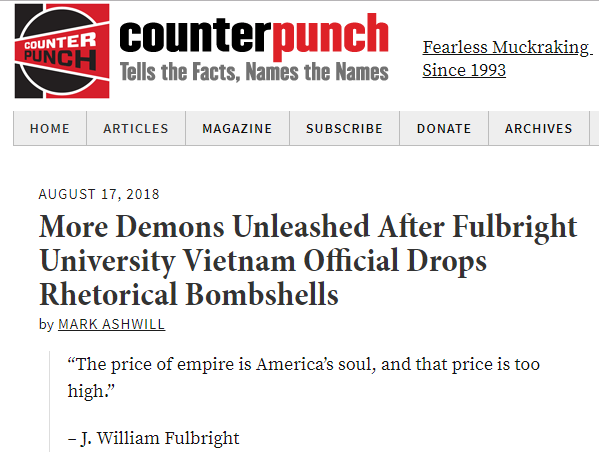 This 17 August 2018 CounterPunch article is the third in a trilogy.  Here are the first and second articles.  This should be my last word about this sad story.

Pardon the nasty military metaphor but it’s not nearly as nasty as some of the quotes from “one of the most influential figures in the US-Viet Nam relationship you’ve never heard of” in a January 2018 interview.

As I mentioned to an FUV official who was involved in Kerrey’s appointment in a previous incarnation, what I’ve discovered in all of this is how invisible the victims of that massacre at the hands of Bob Kerrey and his unit are, both the dead and the living, not to mention the millions of whom Thomas Vallely spoke in a couple of throwaway sentences.

That is my main motivation in writing and speaking out about this, not “sticking it” to any individual or institution.  The tendency of most people involved with this issue to completely ignore the victims is both heartless and morally reprehensible.

The last of the Buddha’s Five Remembrances about impermanence is relevant here (translation by Thích Nhất Hạnh):  “My actions are my only true belongings.  I cannot escape the consequences of my actions. My actions are the ground on which I stand.”  The ground upon which Thomas Vallely once stood dissolved into quicksand the moment those chilling words about civilian deaths in the Mekong Delta and Thạnh Phong spilled out of his mouth.