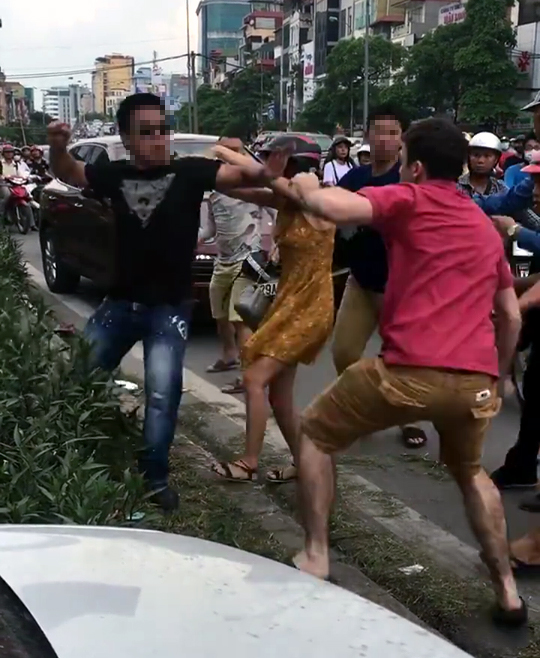 The video of this incident, which occurred on 23 June in Hanoi, went viral with 2 million views.  Below is a summary from DanTri International.  (Here’s a better version of the video that is linked in the article.)

Some witnesses said that the fight on Tran Khat Chan Street started when the man drove his car over the foreigner’s foot. The foreigner told the driver to stop the car so that he could take his shoe, but the driver did not do. So, the foreigner hit the car mirror.

The driver then got out of his car and attacked the foreigner.

The two Vietnamese men and the foreigner went to the local police station where police made them apologise to each other.

This is an object lesson in what not to do in this situation.  Here are the dynamics of the scenario in question, which helped to fuel the fires of aggression and violence.  It involved a foreigner and the foreigner’s girlfriend was Vietnamese, who did her level best to keep him out of the fray.  (There is a lot to say about the cultural dynamics of this situation, including masculine identity and perceptions of foreigners, but it transcends the scope of one blog post.  Suffice it to say that a video of two Vietnamese men fighting would probably not have gone viral.)

Here’s the bottom line:  There are no rules to street fights and, chances are, you are not going to win, if you define winning as teaching the other guy a lesson by giving him a good “whupping”, and walking away unscathed.  Chances are good, in fact, that you could end up in the hospital or worse. And while it’s happening, chances are no one is going to help you because they’re afraid, among other reasons.

This incident started with one man, the driver of the car, and the foreigner on the motorbike.  The former started to throw punches.  He was joined by a friend, which means it quickly became two against one.  It could have been a posse against one.  The driver, in addition to throwing punches, including one that landed on the woman’s face, later picked up a brick, after trying to hit the foreigner with his helmet.  It could have been a knife.  No rules, no “fighting fair,” just unrelenting attempts to dominate one’s opponent.

Fortunately, the police were on hand to ensure a peaceful resolution.  Without their involvement you can let your imagination run wild as to what might have happened.

Advice to foreigners, i.e., foreign men:  Avoid conflict, or if conflicts finds you, walk away.  Be the better man.  Take the high road.  Go home in one piece.

A US colleague recently asked me whether Viet Nam was a safe country.  The answer, of course, is a resounding yes.  There is very little violent crime.  Most are crimes are those against property, e.g., petty theft that includes drive-by purse and bag snatchings, especially in HCMC.  (Injury can occur but it’s incidental.)

Postscript:  Vietnamese men arrested for attacking American in Hanoi (27.6.17, VNExpress International)  The plot thickens.  The police obviously had a change of heart.