40 years ago this week in the waning months of the American War, as it’s known in Vietnam, US bombs were raining down on Hanoi in what came to be known as “The Christmas Bombings.”  This morning, sitting in my office in downtown Hanoi, I listened to children singing Christmas songs in a nearby kindergarten and thought about just how far Vietnam has come in four decades – from the death and destruction of the recent past to the peace and growing prosperity of the present.  This prosperity and openness to the world include Internet access with all of its attendant implications.

According to WeAreSocial, a Singapore-based digital PR organization, there are 30.8 million Internet users in Vietnam, a country with a population of 91.5 million.  To put this in perspective, there were only 100,000 Internet users during my first visit to Vietnam in 1996 in a population of about 75 million.  What’s even more extraordinary is that Vietnam’s per capita income was just $1,410 last year, making it a borderline middle-income country.  (Source: World Bank) 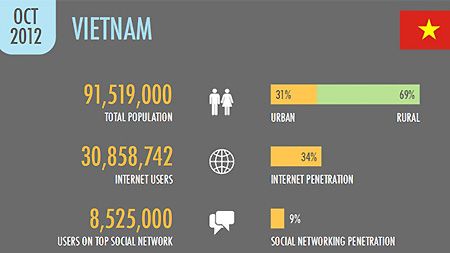 Below are some more relevant facts:

With so many young Vietnamese online the implications for student recruitment are obvious.  According to a recent report produced by World Education Services (WES), “U.S. institutions of higher education should refocus part of their recruitment efforts on the following four emerging markets (listed in order of importance): Saudi Arabia, Brazil, Vietnam, and Turkey.”

The report notes that “While social media presence is the first step, it does not ensure success in recruiting students. Higher education institutions need to also monitor and creatively interact with their relevant target audience by involving current and former international students.”  Another way to maximize the use of social media recruitment efforts is to work with a reliable and trusted in-country partner.

To read more and download the report, follow this link to a WES article entitled Using Social Media to Recruit in Emerging Markets.