We teach our kids to throw garbage in the garbage bin, not on the street. 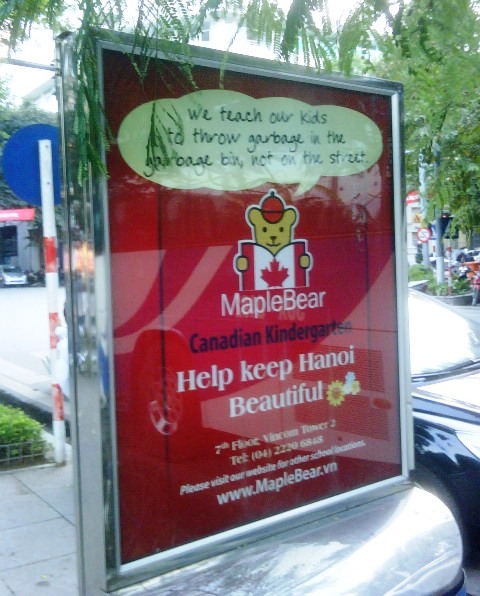 An interesting way to market a kindergarten.  It’s not about learning to communicate, play, and interact with others appropriately; it’s about teaching your children to become good citizens by disposing of their waste properly.

It’s true that there is a distressing shortage of environmental awareness among most Vietnamese; for some the world is their oyster, for others it’s one humongous “garbage bin.”  This is especially worrisome in a country a little larger than the US state of New Mexico with a population nearly 30% the size of the US’s and a rapidly expanding consumer (read throw-away) society.  (Some of the workers I admire the most here are those underpaid and overworked ladies who sweep the streets and pick up the bags of garbage left at the curb.)

Is MapleBear Canadian Kindergarten onto something?  Are parents drawn in by this subtle indictment of their parenting skills or a lack thereof?  Schools as agents of socialization?  If children learn to throw garbage in the garbage bin at school yet see their parents and other family members throwing it out the car window, are they really going to change?

P.S.:  I would prefer to see this sign in Vietnamese… 🙂

One thought on “MapleBear Canadian Kindergarten: Teaching Kids to Throw Garbage in the Garbage Bin”