Skip to content
HomeAlbright & Powell to Speak at the NAFSA 2019 Annual Conference: Say What?

What Were They Thinking?

My actions are my only true belongings.
I cannot escape the consequences of my actions.
My actions are the ground on which I stand.

The Buddha’s Fifth Remembrance from his Five Remembrances (PDF download)

I’m pretty sure What Were They Thinking? is going to be the subtitle of an article about the morally odious decision to invite Madeleine Albright and Colin Powell to speak at the 2019 annual conference of NAFSA: Association of International Educators, which takes place in late May, fittingly, in Washington, D.C.  The last time I used this phrase was when I first wrote about the disastrous appointment of Bob Kerrey as chairman of the Fulbright University Vietnam board of trustees in 2016.  I had the exact same gut reaction to this message, which appeared in my inbox earlier this year.

NAFSA is pleased to announce that Dr. Madeleine K. Albright and General Colin L. Powell (retired) will be the Opening Plenary of the NAFSA 2019 Annual Conference & Expo in Washington, D.C. on Tuesday, May 28.

As one of the world’s most respected diplomats, Dr. Madeleine K. Albright, continues to advocate for democracy and human rights across the world, while also championing the important impact international relations and educational exchanges have on the United States today. In 1997 under President Bill Clinton, Dr. Albright was named the first female Secretary of State and became, at that time, the highest ranking woman in the history of the U.S. government. 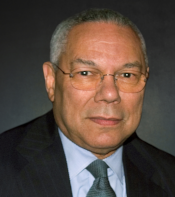 General Colin L. Powell, USA (retired) has devoted his life to public service having held senior military and diplomatic positions across four presidential administrations. Under President George W. Bush, Powell was appointed the 65th Secretary of State and led the State Department in major efforts to address and solve regional and civil conflicts throughout the world. He also worked at the forefront of American efforts to advance economic and social development worldwide.

Say it ain’t so, NAFSA!  Surely, you can do better than the likes of Albright and Powell.  As one colleague opined, “They’re aiming to impress NAFSA attendees with Albright and Powell’s ‘star power’, lies and callousness notwithstanding.  You can bet your bottom dollar that no questions from the audience that are not pre-screened will be taken.”  Yes, yes, sadly but not surprisingly.

If you know anything about the background of “one of the world’s most respected diplomats” and someone who “has devoted his life to public service having held senior military and diplomatic positions across four presidential administrations,” you know that I will highlight at least some of the following issues:

Albright, a nationally televised interview, and 500,000 Iraqi children who died because of US-led sanctions against that country.  Death due to malnutrition and disease falls into the category of “ultimate human rights violation,” doesn’t it?  In the same role, Albright did her utmost to prevent the UN from entering Rwanda to prevent the genocide that occurred in spring 1994.  She is a junior varsity member of Team USA.

Powell, weapons of mass destruction, Iraq, the UN, and some shocking examples from his time as a high-ranking Army officer in the US war in Viet Nam.   He is a varsity member of Team USA.

If the truth can hurt, the truth about the two of them, in particular, Colin Powell, is especially painful.

Two questions to ponder between now and then: