Skip to content
Home‘Tis the Season: Celebrating the Founding of the Chu Van An High School International Club 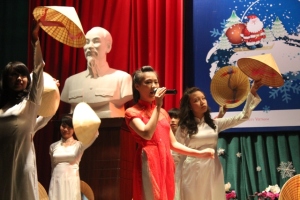 I had the pleasure of spending part of Christmas Eve at Chu Van An High School to celebrate the founding of the International Club.  In addition to delivering some remarks (my company, Capstone Vietnam, is a major sponsor of the club in 2012), presenting flowers and a sponsorship certificate, and participating in a lucky draw, my colleagues and I sat back and enjoyed the many talented performers “doing their thing” on stage and in the aisles.  One of the more memorable acts was a breakdancing Santa, who rocked the house.

As I mentioned in my mercifully short speech to a restless audience of (mostly) students who were waiting with rapt anticipation for the various performances by their peers, I’ve noticed in the time that I have lived here just how open many young Vietnamese are to the world, how interested they are in learning foreign languages and about other cultures and, in growing numbers, traveling, participating in short-term internship and work programs, and studying overseas.