Skip to content
HomeLast Night I Dreamed of Peace: The Diary of Đặng Thùy Trâm 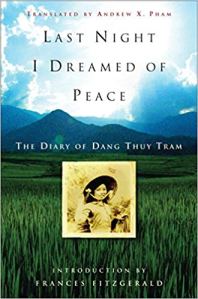 July 25, 1968: Oh, my God. How hateful the war is. And the more hate, the more the devils are eager to fight. Why do they enjoy shooting and killing good people like us? How can they have the heart to kill all those youngsters who love life, who are struggling and living for so many hopes?  -Đặng Thùy Trâm

11 years ago, Đặng Thùy Trâm’s wartime diaries were published in hardcover in the US.  In the summer of 2005, they had been published in Viet Nam, where the book became a bestseller.  (If you are unfamiliar with this poignant story, check out this overview and this October 2005 article.)

Below is a letter that Ted Engelmann shared with the Vietnam Studies Group.  Ted is a veteran of the US war in Viet Nam to whom Fred Whitehurst gave the diaries at a 2005 conference at Texas Tech.  It was Whitehurst, then a 22-year-old military intelligence specialist, who defied orders to burn the diaries following the advice of his South Vietnamese translator, who told him “Don’t burn this one, Fred, it already has fire in it.”

For several years I’ve been asked by many Vietnamese how the diaries of Dang Thuy Tram found their way back to her family in Ha Noi, Viet Nam.  People seem to realize the stories they’ve read and heard leave considerable doubt.

In case anyone in the VSG is interested, lo these many years later, here is the short version from the one who handed the “diaries” to the Tram family the evening of 25 April 2005.

Saturday, 17 March 2005, was an important moment in the history of the diaries.  At a conference sponsored by the Vietnam Center & Archives at Texas Tech University, Lubbock, I watched as Fred Whitehurst and his brother, Rob, donate the diaries of Dang Thuy Tram to the Archives.  That evening, Rob gave me (and others) a CD onto which he had scanned the two “diaries.”

A few days later, in Ha Noi, I asked a Vietnamese friend if she could tell me what was on the CD, since I wasn’t able to speak or read Vietnamese.  After reading a random passage for a few minutes, she teared up and quit.  To my surprise, she said the writing was too emotional for her to continue.

Concerned about the emotional content, I asked another Vietnamese friend to look at the CD, telling her about the previous experience, and would she help me locate the family of the woman who wrote the diaries while I went to Saigon.  As an American War veteran, I wanted to make “final photographs” on 30 April 2005 for my photographic project, documenting the American War in Viet Nam.

After a couple days reading, my friend was about to give up looking for the family when she discovered Thuy’s father had been a doctor at the hospital near her village, a little north of Ha Noi; a revelation she explained thirteen years later.  That personal connection inspired her to look deeper.  A few days after calling the hospital for information, she made contact with the family who lived several blocks down the street from her office.

Sunday, 24 April 2005, I received a very early morning call at my Saigon hotel.  When I answered, a woman said she was Kim Tram, youngest sister of Dang Thuy Tram, calling from Ha Noi.  She understood I had some diaries and wanted to meet me right away.  Explaining I was in Saigon, she invited me to bring the diaries to her house in Ha Noi, and meet Mother Tram and her family the following day.  Although I had a splitting headache at that moment, I felt compelled as a messenger to oblige, and agreed to her plan.

A couple hours later at the Viet Nam Airline office, I bought a ticket to Ha Noi for the next day.  About an hour after I purchased my ticket, my stress headache disappeared.  With a clear head, I remembered to email Fred and Rob with the exciting news that Thuy’s family was alive.

Arriving in Ha Noi the next day, I took a taxi from Noi Bai airport to my hotel, where my friend left the CD at the front desk.  That evening, Kim, with sister Hien and her husband Ho Nam driving their SUV, arrived and took me to Kim’s home that she shares with Mother.  Entering the ground-floor living room, I was warmly greeted by Mother Tram, then introduced to her extended family, a packed house of relatives, two Vietnamese TV cameras, and many reporters. I was overwhelmed at being the center of attention, their friendliness, and their interest in my small package.

Using my laptop, the family was immediately captivated by Thuy’s beautifully hand-written “diaries.”   Many tears were shed as the family sat on the couch, reading various entries during two stressful years, describing the private thoughts and feelings of a medical doctor from Ha Noi, treating wounded and dying soldiers at war with America in South Viet Nam, revealed for the first time to her own family, thirty-five years after her death.  Although buried in a martyr’s grave in Ha Noi, the spirit of a daughter and sister was finally safe and home from the war.

When it was time for me to leave, I gave the CD to the family with my best wishes.  While it felt good to help an American veteran (Fred Whitehurst, who had kept the diaries for so long), I was deeply honored to be a messenger of peace; returning a lost daughter to her family.

As you can tell, after having been given the CD, a Vietnamese woman and myself are the only two people directly involved in returning the diaries of Dang Thuy Tram…perhaps guided by Thuy’s spirit, if you believe in such things.

Thank you for your interest,